In a letter to the right honourable Ed Davey MP, the secretary of state for energy and climate change, the chairman of OFTEC and MD of Riello Burners, Barry Gregory, said excluding bioliquids would encourage existing oil households to “do nothing” to make carbon savings.

The campaign has the backing of a number of oil fired equipment manufacturers including Worcester Bosch, Warmflow, Grant, Watson Fuels, Firebird and Harlequin. The Federation of Petroleum Suppliers (FPS) has also pledged their support.

OFTEC and the FPS have been working with the government since 2008, exploring ways in which a new liquid fuel could help de-carbonise heating. B30K, a new fuel specification with 28% less carbon content than kerosene, was developed as a “drop in” replacement for oil users.

Although B30K was included in the original RHI consultation in February 2010, the fuel has been ignored in recent policy statements.

In the letter Barry Gregory said: “Technologies which are included in the RHI will still be more expensive than conversion to B30K and in many cases cause severe disruption for homeowners.

“We estimate that, if the RHI is granted, bioliquids could be installed in sufficient homes to save two million tonnes of CO2 per annum by 2020.” 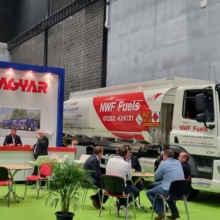